During our second week of training with the Burley Tail Wagon the dogs went in opposite directions. Kona progressed by leaps and bounds, and Riley took a few steps back.

Kona gladly hoped in on command, went into an immediate sit stay and held that stay until I released her. I introduced movement by using the stroller attachment and rolling her around the house. Again, it sounds silly, but gradual training has always worked for us.

Riley on the other hand, isn’t comfortable with the trailer moving. He demonstrated that when he jumped out as soon as I started rolling it. So in order to reinforce the trailer as a safe place I’ve been feeding him his meals in it and giving him peanut butter filled KONGS. I need to take this really slow with him. He’s an old dog and he’s become a bit stubborn about things as he’s aged, so I need to not push him.

So after one week of clothes basket training, and one week of living room training, I felt confident that Kona was ready to ride with a bike. We decided to head out to Belle Isle State Park this past weekend for some test rides. It’s a beautiful park with paddling, camping, and super quiet roads for riding. As I unloaded the trailer Kona got excited and immediately hopped in it – a great sign! I attached my bike to the trailer, asked Kona to hop in, and walked the bike with her in it. We did one loop around the campsite while Kona got treats and praise the whole time. I parked the bike, unclipped the tailgate and Kona held her stay until I released her. This is something I’m really trying the stress with both dogs – unexpected exits from the trailer are not allowed!

After the success of Kona’s first ride, I decided to ride the bike for another loop. It was a success! Kona stayed in the trailer the whole time. She looked a little nervous a few times when she stood up instead of staying in a relaxed sit, but we kept her first ride short and sweet. It was awesome!

I was able to peddle her a total of about 5 miles this weekend in the trailer. Again I’m intentionally keeping the rides short so we can build up her comfort and confidence.

I’ll keep working with Riley, to see if I can get him more comfortable with movement while I start working Kona up to some longer rides.

Here are a few things I learned this week that are important to share: 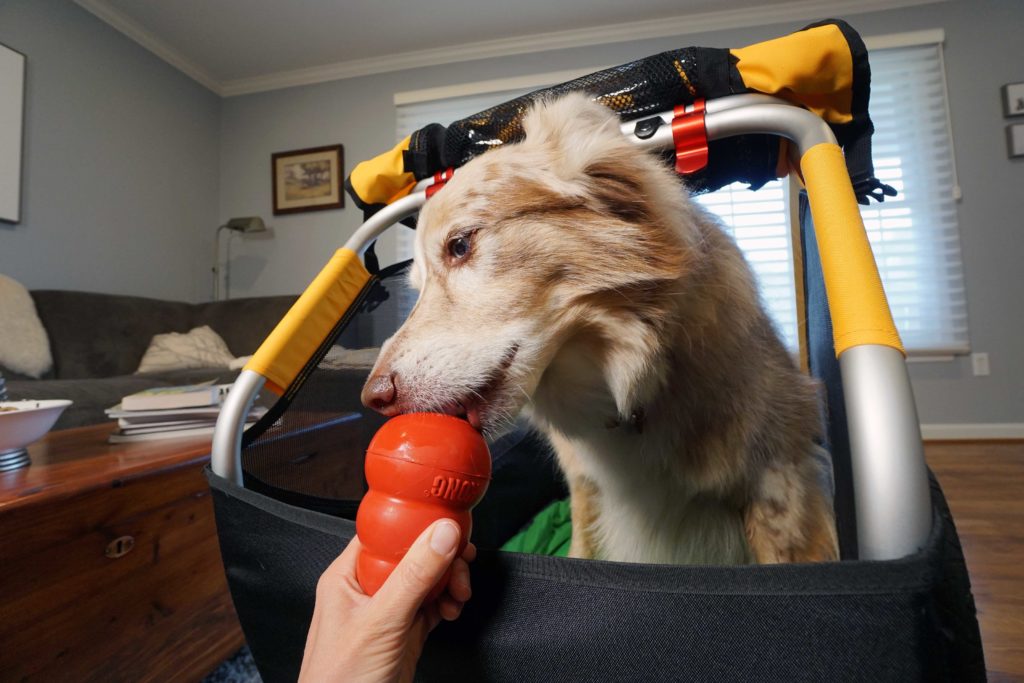 Riley getting one of his favorite treats in the Tail Wagon to reinforce that it’s a good place to hang out! 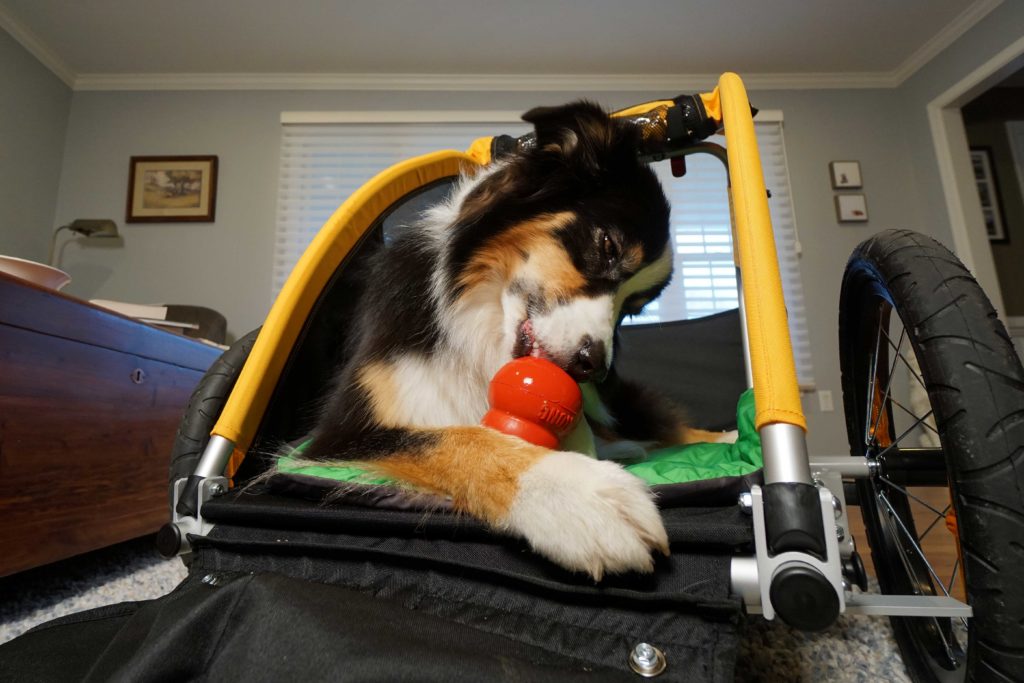 If one dog gets a KONG, the other has to as well! 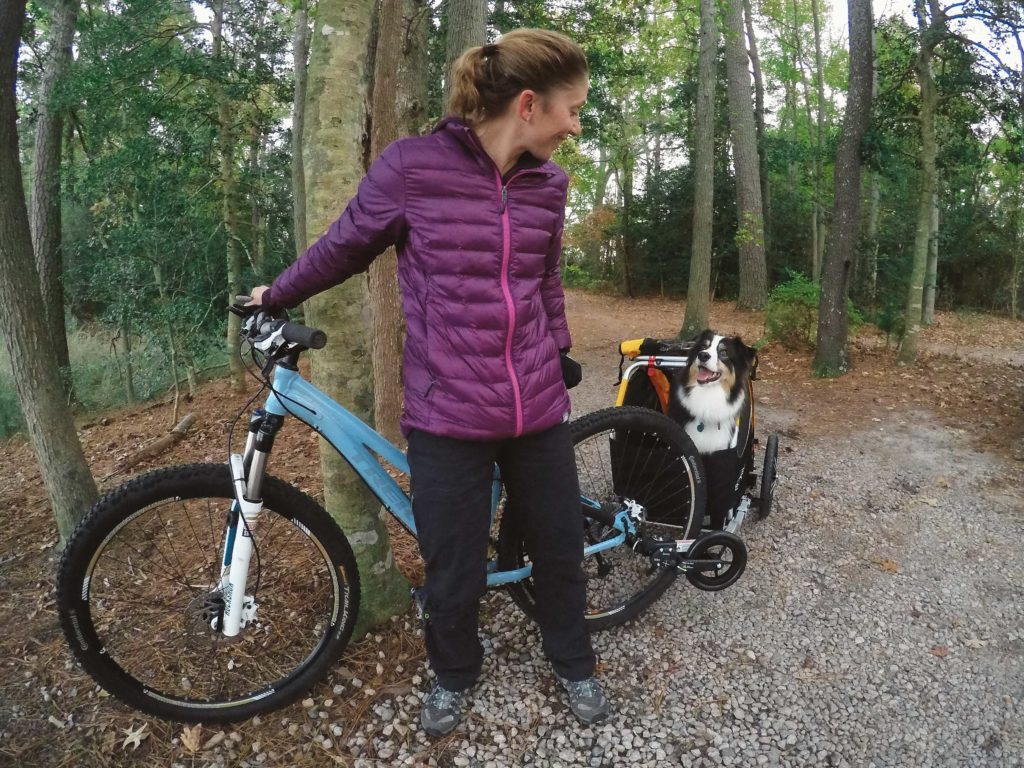 Walking the bike with Kona in the Wagon was a great intermediate step. 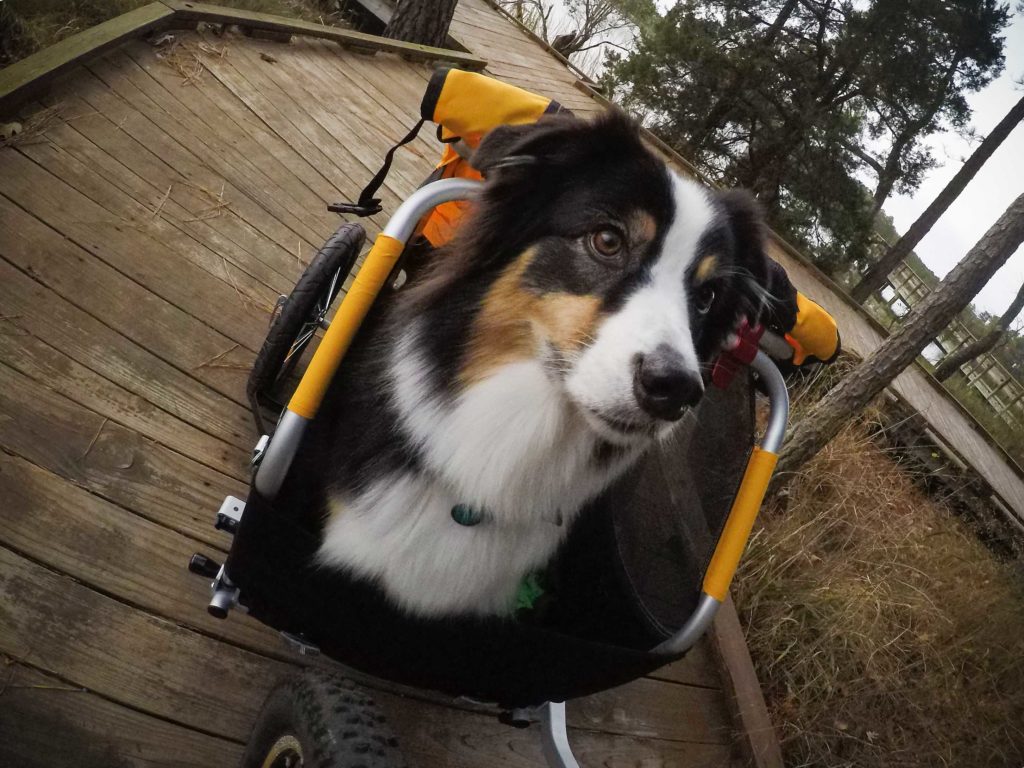 Her first ride in the Tail Wagon!